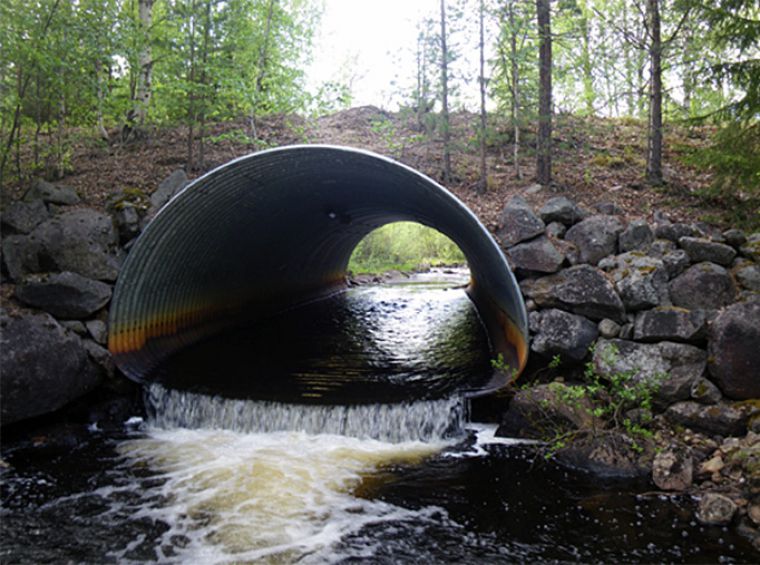 A road culvert put in place too high which causes a migratory barrier in the watercourse.

Connectivity is a crucial feature of aquatic ecosystems. The possibility for fish and other organisms to freely move between different parts of the water system is essential. Road culverts and manmade dams may form artificial barriers, preventing such movements. Thus, action is necessary to restore the connectivity watersheds. This enables fish and invertebrate species to migrate within watercourses and in between lakes and streams, thus gaining mutual access to reproduction- and growth habitats that have been formerly inaccessible. These migrations increases reproduction and feeding possibilities and will enhance possibilities for species to maintain good population status in the area. This will re-establish the original biodiversity in the lake and stream habitats, stabilizing structure and function of the ecosystem. Fish species benefitting from this action are primarily lake dwelling brown trout and greyling reproducing in tributaries. Also recruitment of stream spawning coregonids will benefit as well as all fish species (cottids) and motile invertebrates in the watershed due to generally improved possibilities to freely move between different parts of the watershed. Increased brown trout densities and re-colonization of stream sections will enhance dispersal and recruitment of freshwater pearl mussels. Increased densities of fish populations in streams will benefit otter populations that, particularly during winter time when lakes are frozen over, need to find prey in running water. In the project area 17 migratory barriers due to road culverts have been eliminated. Specific conditions at the sites have determined what type of action that was carried out. The improvement of road culverts also gives opportunities for otter to pass through the road culverts which minimize the risk of death by traffic.

Depending on conditions at the sites one (or a combination of two) actions has been carried out:

In the project area, six dams were identified as significant barriers for fish and other organisms moving within streams and in and out of the lakes.  Three dams were taken out, at the other three dams fish-way bypasses were built to improve connectivity.